colleague of spock and sulu crossword

Nyota Uhura /niːˈoʊtə ʊˈhʊrə/ is a fictional character in the Star Trek franchise. The character was portrayed by Nichelle Nichols through the sixth Star Trek film. Since 2009, a younger Uhura has been portrayed by actress Zoe Saldana. 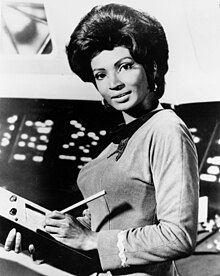 Uhura is a translator and communications officer who specializes in linguistics, cryptography, and philology. She was an important part of the original series’ multicultural crew[1] and one of the first characters of African descent to be featured in a non-menial role on an American television series.

In the 2009 film, the mystery regarding Uhura’s first name is the subject of a running joke as Kirk repeatedly tries to find out what it is before finally hearing Spock call her “Nyota”.[6]