Dachshunds were bred specifically to hunt what wily mammal?

The name “dachshund” is German, translating as “badger dog” or “badger hound.” The shape and size of the breed makes sense for this purpose, as the dogs could often follow badgers into their holes and continue the pursuit underground. This made their short, long stature ideal for the role. Source: Merriam Webster

Hunting badgers for sport has been common in many countries. The Dachshund (German for “badger hound”) dog breed was bred for the purpose. Badger-baiting was formerly a popular blood sport. Although badgers are normally quite docile, they fight fiercely when cornered.

This led people to capture and box badgers and then wager on whether a dog could succeed in removing the badger from its refuge. In England, opposition from naturalists and moral crusaders led to its ban under the Cruelty to Animals Act of 1835 and the Protection of Badgers Act of 1992. made it an offence to kill, injure, or take a badger or to interfere with a sett unless under license from a statutory authority. The Hunting Act of 2004 further banned fox hunters from blocking setts during their chases. 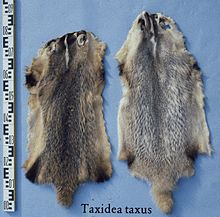 Badgers have been trapped commercially for their pelts, which have been used for centuries to make shaving brushes,a purpose to which it is particularly suited owing to its high water retention. Virtually all commercially available badger hair now comes from mainland China, though, which has farms for the purpose.

The Chinese supply three grades of hair to domestic and foreign brush makers. Village cooperatives are also licensed by the national government to hunt and process badgers to avoid their becoming a crop nuisance in rural northern China. The European badger is also used as trim for some traditional Scottish clothing. The American badger is also used for paintbrushes and as trim for some Native American garments. It has also been occasionally used for doll hair.