The completion of what structure in 1971 altered the agricultural significance of the longest river of a country whose ancient name means “black land”?

The Aswan Dam is an embankment dam built across the Nile at Aswan, Egypt between 1898 and 1902. Since the 1960s, the name commonly refers to the Aswan High Dam. Construction of the High Dam became a key objective of the Egyptian Government following the Egyptian Revolution of 1952, as the ability to control floods, provide water for irrigation, and generate hydroelectricity were seen as pivotal to Egypt’s industrialization. 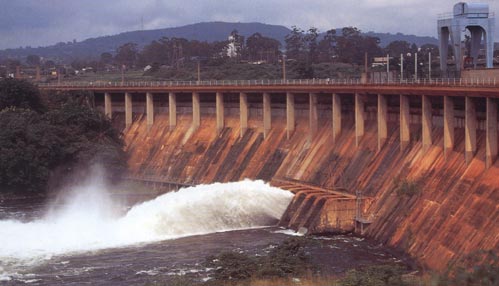 The Aswan High Dam, when it was build created Lake Nasser, Lake Nasser Streches back 270 kilometres from the Dam. The Lake has also created alot more land for people to farm on. This is because a lot of water is stored in the lake, and in turn this water can be used to irrigate land around the lake. Lake Nasser has also created a big fishing industry, which produces 25,000 tonnes of fish a year, the fishing industry is aiming to produce 100,000 tonnes by the year 2000.

The High Dam was constructed between 1960 and 1970, and has had a significant effect on the economy and culture of Egypt.