What abolitionist rented a house from the husband of the woman for whom Grace Park in Akron, Ohio, is named

John Brown (May 9, 1800  December 2, 1859) was an American abolitionist who believed armed insurrection was the only way to overthrow the institution of slavery in the United States.

Colonel Simon Perkins was born on February 6, 1805 in Warren, Ohio to General Simon Perkins and Nancy Ann Bishop Perkins. His first position was with his father’s land company in Warren. He married Grace Ingersoll Tod of Youngstown, Ohio on November 23, 1833. Two years later, he and his wife and baby daughter, Anna, moved to Akron, Ohio in order to oversee his father’s business affairs. Their first home was a small wooden frame house located along the Portage Path of Summit County, Ohio. John Brown (abolitionist) would later rent this building, known as the John Brown House (Akron, Ohio) from Perkins during their business partnership.

Construction began immediately on the Perkins Stone Mansion in 1835, and it was completed in 1837. The family moved in that spring. Perkins was mainly interested in agriculture, sheep, and livestock and therefore turned his property on Perkins Hill into a large farm. He imported the best breeds of sheep to his farm and eventually hired John Brown (abolitionist) to oversee them. Their firm was known as Perkins & Brown. The business eventually failed and Perkins absorbed most of the loss.

During the 1856 conflict in Kansas, Brown commanded forces at the Battle of Black Jack and the Battle of Osawatomie. Brown’s followers killed five slavery supporters at Pottawatomie. In 1859, Brown led an unsuccessful raid on the federal armory at Harpers Ferry that ended with the multi-racial group’s capture. Brown’s trial resulted in his conviction and a sentence of death by hanging. 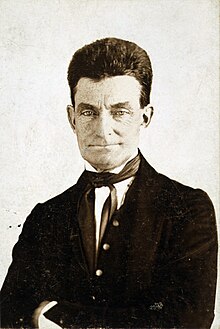