which horror film icon was not featured in the classic era of universal studios horror films? 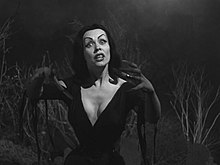 Maila Nurmi (December 11, 1922 – January 10, 2008)[1] was a Finnish-American actress who created the campy 1950s character Vampira. She portrayed Vampira as TV’s first horror host and in the Ed Wood cult film Plan 9 from Outer Space.[2] She is also billed as Vampira in the 1959 movie The Beat Generation where she plays a beatnik poet