Who, along with her daughter Caroline and others, stitched the original stars and stripes that inspired the words, that were put to music by John Stafford Smith

Mary Pickersgill (born Mary Young; February 12, 1776  October 4, 1857), was the maker of the Star Spangled Banner Flag hoisted over Fort McHenry during the Battle of Baltimore in the War of 1812.

While negotiating a prisoner exchange aboard a British ship, Francis Scott Key saw the flag, and this inspired him to pen the words to the poem “The Defence of Fort McHenry” that later became the National Anthem of the United States in 1931.

Pickersgill’s daughter, in an 1876 letter to Georgiana Armistead Appleton, the daughter of Major Armistead (later breveted a lieutenant colonel), wrote these particulars about the flag:

The flag being so very large, mother was obliged to obtain permission from the proprietors of Claggetts [sic][11] brewery which was in our neighborhood, to spread it out in their malt house; and I remember seeing my mother down on the floor, placing the stars: after the completion of the flag, she superintended the topping of it, having it fastened in the most secure manner to prevent its being torn away by (cannon) balls: the wisdom of her precaution was shown during the engagement: many shots piercing it, but it still remained firm to the staff. Your father (Col. Armistead) declared that no one but the maker of the flag should mend it, and requested that the rents should merely be bound around. 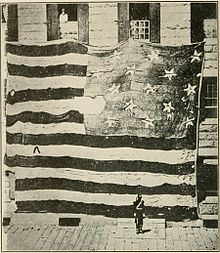 Pickersgill’s Star Spangled Banner Flag displayed in 1873 at the Boston Navy Yard
The large flag contained over 400 yards (366 meters) of fabric, and included 15 stripes and 15 stars, one for each of the 15 states of the union. The stars were made of cotton and the stripes and blue canton were of English wool bunting.[3] Each stripe was two feet (60 cm) wide and each of the stars measured 24 inches (60 cm) across from tip to tip. The women did much of the work in the evening after the brewery closed, sometimes working until midnight, and Pickersgill delivered the flags to Fort McHenry on August 19, 1813, a full year before the Battle of Baltimore