with whom did abraham lincoln engage in a series of seven famous debates in 1858?

The LincolnDouglas Debates of 1858 (also known as The Great Debates of 1858) were a series of seven debates between Abraham Lincoln, the Republican candidate for the United States Senate from Illinois, and incumbent Senator Stephen Douglas, the Democratic Party candidate. 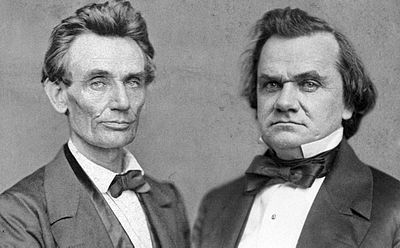 At the time, U.S. senators were elected by state legislatures; thus Lincoln and Douglas were trying for their respective parties to win control of the Illinois legislature.

The debates previewed the issues that Lincoln would face in the aftermath of his victory in the 1860 presidential election. Although Illinois was a free state, the main issue discussed in all seven debates was slavery in the United States.

The debates were held in seven towns in the state of Illinois: