Only a generation ago, sending email was a cumbersome process, but to someone in Britain in 1984 it seemed speedy (it wasn’t):

On this day in 1781, William Herschel makes a discovery:

Uranus had been observed on many occasions before its recognition as a planet, but it was generally mistaken for a star. Possibly the earliest known observation was by Hipparchos, who in 128 BC may have recorded it as a star for his star catalogue that was later incorporated into Ptolemy‘s Almagest.[18] The earliest definite sighting was in 1690 when John Flamsteed observed it at least six times, cataloguing it as 34 Tauri. The French astronomer Pierre Lemonnier observed Uranus at least twelve times between 1750 and 1769,[19] including on four consecutive nights.

Sir William Herschel observed Uranus on March 13, 1781 from the garden of his house at 19 New King Street in Bath, Somerset, England (now the Herschel Museum of Astronomy),[20] and initially reported it (on April 26, 1781) as a comet.[21] Herschel “engaged in a series of observations on the parallax of the fixed stars”,[22] using a telescope of his own design.

He recorded in his journal “In the quartile near … Tauri … either [a] Nebulous star or perhaps a comet”.[23] On March 17, he noted, “I looked for the Comet or Nebulous Star and found that it is a Comet, for it has changed its place”.[24] When he presented his discovery to the Royal Society, he continued to assert that he had found a comet, but also implicitly compared it to a planet:[22]

“The power I had on when I first saw the comet was 227. From experience I know that the diameters of the fixed stars are not proportionally magnified with higher powers, as planets are; therefore I now put the powers at 460 and 932, and found that the diameter of the comet increased in proportion to the power, as it ought to be, on the supposition of its not being a fixed star, while the diameters of the stars to which I compared it were not increased in the same ratio. Moreover, the comet being magnified much beyond what its light would admit of, appeared hazy and ill-defined with these great powers, while the stars preserved that lustre and distinctness which from many thousand observations I knew they would retain. The sequel has shown that my surmises were well-founded, this proving to be the Comet we have lately observed”. 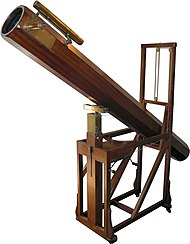 Herschel notified the Astronomer Royal, Nevil Maskelyne, of his discovery and received this flummoxed reply from him on April 23: “I don’t know what to call it. It is as likely to be a regular planet moving in an orbit nearly circular to the sun as a Comet moving in a very eccentric ellipsis. I have not yet seen any coma or tail to it”.[25]

Although Herschel continued to describe his new object as a comet, other astronomers had already begun to suspect otherwise. Finnish-Swedish astronomerAnders Johan Lexell, working in Russia, was the first to compute the orbit of the new object[26] and its nearly circular orbit led him to a conclusion that it was a planet rather than a comet. Berlin astronomer Johann Elert Bode described Herschel’s discovery as “a moving star that can be deemed a hitherto unknown planet-like object circulating beyond the orbit of Saturn”.[27] Bode concluded that its near-circular orbit was more like a planet than a comet.[28]

The object was soon universally accepted as a new planet. By 1783, Herschel acknowledged this to Royal Society president Joseph Banks: “By the observation of the most eminent Astronomers in Europe it appears that the new star, which I had the honour of pointing out to them in March 1781, is a Primary Planet of our Solar System.”[29] In recognition of his achievement, King George III gave Herschel an annual stipend of £200 on condition that he move to Windsor so that the Royal Family could look through his telescopes.[30]