On this date Eugene Shepard was born near Green Bay. Although he made his career in the lumbering business near Rhinelander, he was best known for his story-telling and practical jokes. He told many tales of Paul Bunyan, the mythical lumberjack, and drew pictures of the giant at work that became famous. Shepard also started a new legend about a prehistoric monster that roamed the woods of Wisconsin – the hodag. Shepard built the mythical monster out of wood and bull’s horns. He fooled everyone into believing it was alive, allowing it to be viewed only inside a dark tent. The beast was displayed at the Wausau and Antigo county fairs before Shepard admitted it was all a hoax. [Source: Badger saints and sinners, by Fred L. Holmes, p.459-474] 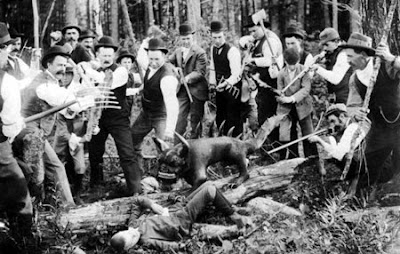 The hodag’s become the mascot for Rhinelander, Wisconsin,  and  a music festival, the Hodag County Festival, that carries the animal’s name (gates open this July 2nd, by the way).