Whitewater will have a rainy Sunday, with a high of fifty-seven. Sunrise is 6:45 AM and sunset is 7:15 PM, for 12h 29m 49s of daytime. The moon is a waning crescent with 3.4% of its visible disk illuminated. Today is the one hundred thirty-eighth day.Days since Trump’s election, with 11.9.16 as the first day.

On this day in 1881, famous Civil War mascot Old Abe dies from injuries he sustained during a fire at the State Capitol. He was the mascot for Company C, an Eau Claire infantry unit that was part of the Wisconsin 8th Regiment. His fame continued after the war:

After Wisconsin took possession of Old Abe, state officials classified him as a “War Relic” and created an “Eagle Department” in the Capitol building, which included a two-room “apartment,” a custom bathtub for the eagle, and a caretaker. Later John Hill served in this capacity.[23] Old Abe became a nationally known celebrity, whose presence at events was requested by individuals and organizations from the state and the country. Old Abe appeared at the 1876 Centennial Exposition in Philadelphia, Pennsylvania and the 1880 Grand Army of the Republic National Convention. Other events were fundraisers for charities, which included: the 1865 Northwest Sanitary Fair in Illinois, Soldiers’ Home Fair, Soldier’s Orphan’s Home, Harvey Hospital, and Ladies Aid Society of Chippewa Falls.[3] In February 1881, a small fire broke out in the basement of the Capitol. After Old Abe raised an alarm, the fire was quickly put out. However, the eagle inhaled a large amount of thick black smoke, and about a month later, lost strength and began to decline. On March 26, 1881, in spite of the efforts of numerous doctors, Old Abe died in the arms of caretaker George Gilles.[23] 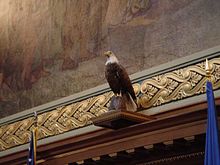 On September 17, 1881, Old Abe’s stuffed remains were placed in a glass display case located in the rotunda of the Capitol. Four years later, Old Abe was moved, within the Capitol, from the rotunda to the G.A.R. Memorial Hall. In 1900, his remains were transferred to the new building of the State Historical Society of Wisconsin. However, pressure from veterans convinced Governor Robert M. Lafollette to return Old Abe to the Capitol building in 1903. That year, President Theodore Roosevelt viewed the remains and expressed his pleasure at being able to see the eagle he had studied in school as a child. In 1904, Old Abe’s remains and the glass case were destroyed in a fire that razed the Capitol building.[23]

Since 1915, a replica of Old Abe has presided over the Wisconsin State Assembly Chamber in the Capitol, and another is on display at the Wisconsin Veterans Museum in Madison.[24] A stone sculpture of the eagle is at the top of the Camp Randall Arch.[11]

Recommended for reading in full —

Tim Alberta describes events from Inside the GOP’s Health Care Debacle: “Donald Trump had heard enough about policy and process. It was Thursday afternoon and members of the House Freedom Caucus were peppering the president with wonkish concerns about the American Health Care Act—the language that would leave Obamacare’s “essential health benefits” in place, the community rating provision that limited what insurers could charge certain patients, and whether the next two steps of Speaker Paul Ryan’s master plan were even feasible—when Trump decided to cut them off. “Forget about the little shit,” Trump said, according to multiple sources in the room. “Let’s focus on the big picture here.” The group of roughly 30 House conservatives, gathered around a mammoth, oval-shaped conference table in the Cabinet Room of the White House, exchanged disapproving looks. Trump wanted to emphasize the political ramifications of the bill’s defeat; specifically, he said, it would derail his first-term agenda and imperil his prospects for reelection in 2020. The lawmakers nodded and said they understood. And yet they were disturbed by his dismissiveness. For many of the members, the “little shit” meant the policy details that could make or break their support for the bill—and have far-reaching implications for their constituents and the country.”

Matt Flegenheimer and  Thomas Kaplan contend that Paul Ryan Emerges From Health Care Defeat Badly Damaged: “Less than 18 months after being elected speaker, Mr. Ryan has emerged from the defeat of the health care bill badly damaged, retaining a grip on the job but left to confront the realities of his failure — imperiling the odd-couple partnership that was supposed to sustain a new era of conservative government under unified Republican rule.”

Graydon Carter contends that the Trump Presidency is Already a Joke (But It’s No laughing Matter): “Trump’s one brief moment of acting presidential—when he read off a teleprompter for 60 minutes and 10 seconds during his address to Congress—served only to show just how low the bar for presidential behavior has plummeted since January. Watching TV commentators applaud him for containing himself for a little over an hour was like hearing a parent praise a difficult child for not pooping in his pants during a pre-school interview. Besides, vintage Trump is not going anywhere anytime soon. A couple of weeks earlier, during a visit by the Japanese prime minister, Shinz? Abe, the president told an acquaintance that he was obsessed with the translator’s breasts—although he expressed this in his own, fragrant fashion.”

Hannah Levintova outlines The Long, Twisted, and Bizarre History of the Trump-Russia Scandal: “The Trump-Russia scandal—with all its bizarre and troubling twists and turns—has become a controversy that is defining the Trump presidency. The FBI recently disclosed that since July it has been conducting a counterintelligence investigation into possible coordination between Trump associates and Russia, as part of its probe of Moscow’s meddling in the 2016 election. Citing “US officials,” CNN reported that the bureau has gathered information suggesting coordination between Trump campaign officials and suspected Russian operatives. Each day seems to bring a new revelation—and a new Trump administration denial or deflection. It’s tough to keep track of all the relevant events, pertinent ties, key statements, and unraveling claims. So we’ve compiled what we know so far into the timeline below, which covers Trump’s 30-year history with Russia.  We will continue to update the timeline regularly as events unfold. (Click here to go directly to the most recent entry.) Please email us at [email protected] if you have a tip or we’ve left anything out.”

People on Twitter are mocking Trump for pretending to drive a big rig truck (instead of reading and comprehending the details of health care legislation that he dismissively described as “the little shit“):